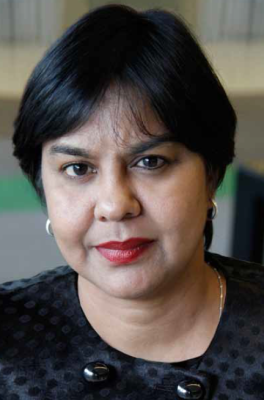 By Jackie Lagus, based on an interview by Anna Morris.

Anisha Archary has devoted herself to a life of continuous learning – and in the process, is helping others to achieve their dreams and ambitions. As Old Mutual’s human resources director of emerging markets, Archary has the task of managing the people issues, strategy and practices that affect twentyone thousand five hundred employees in a portfolio spanning South Africa, Africa, Columbia, Mexico, India and China.

Having climbed a steadfast and proactive path in her twenty-five-year career since qualifying as a psychologist, Archary has continuously forged new ground in her work, be it at Spoornet, Portnet or South African Airways. Rather than consciously plotting a course with the goal of emerging at the helm of an organisation, Archary proposes that it has been more a process of challenging herself personally and professionally to achieve the best outcomes. “I am always looking for new ways, always thinking,” she explains. “I live in my head, and am always thinking of how I could do things differently. How I could do that better? What would I change, what would make a difference? What would impact someone’s life?”

Perhaps it is no surprise that Archary has been so instrumental in directing people and helping nurture their dreams and talents. As a child she grew up in a culture of building team spirit. Her parents were actively involved in the management of a football team, and organising the supporters, selling tickets, and celebrating the success once the team had won, were all early lessons in working with people and building a team, Archary recalls. She travelled with the team around the country until her first year at university, when a community of a different kind sparked her interest. “As a young university student we were actively involved in education issues,” she recounts. “As young leaders of the time – though I certainly was not in the forefront – we were certainly groupings that understood our purpose, and what we wanted to achieve for our country.”

On her journey from young graduate to corporate executive, Archary has refined her leadership skills through rigorous self-examination and ongoing knowledge acquisition. Referring to her leadership style today, she describes herself as a ‘strategic change leader’. “I am not a technocrat,” she says. “I always say to people, ‘If you want a functional expert, then do not come and look at me.’ I manage large-scale change and transformation. I take chaos and create order out of chaos. That has been my history wherever I have gone.” Archary goes on to describe the time in her career when, early on, she was hired to transform the service culture at South African Airways (SAA). It was her job to ensure that the customer once again became a priority in an industry that had lost touch with the people it served. Her ability to identify the big picture and galvanise the resources to turn the operation around was critical to her success. “I mobilised and built an organisation that went from number twelve to three in the world, on the Skytrax customer survey,” she reports.

Of the influences in her life, the people who played their part in shaping and constructing her leadership values, Archary says, “Within the family context it would be my mother, who was a working mum and set a good example. She was a great role model, showing that you could work and still be involved with your family.” In the workplace, Archary recalls many good leaders that she was exposed to at a time before black economic empowerment or transformation of industry. “You had to go through the hard years of dealing with resistance to you based on who you were in terms of race, rather than what you knew,” she recalls. “There were many leaders at that point who coached me.” The three seminal figures that set the bar for uncompromising standards were Frank Pretorius at Spoornet, Johan Hagan at Portnet and Coleman Andrews of SAA. However, it was Andrews who was the greatest inspiration. “I was on the exco at SAA, in a leadership role, reporting to him,” Archary explains. “What he brought was a strategic view of the world and how business could be shaped. More importantly, the customers were at the centre of everything we did.”

Andrews represents the kind of visionary leader that has inspired Archary in her professional life. “The true skill that I admire in the leader is the ability to know where they want to go, to know where they are, and to build the journey map to get there,” she says. Over time, Archary has discovered that leadership is not always so much about what you know, but rather about how you can adapt the lessons learnt and theories incorporated for the environment you are serving. In the heyday of human resource management, she points out, many leaders attempted to directly transplant behavioural and organisational models and theories from the United States into South African soil. Some theories, however, have served Archary well. She recalls an airline management programme in Switzerland during the early 1990s, which introduced her to the research underpinning the integrated approach to the service delivery model. “It is a model that I have used year after year,” she reveals. “It is such a simple and focussed model. It is focussed on the customer at the centre of all we do, and everything works backwards from that point.”

Archary believes in applying her skills, intuition and experience to the country’s unique set of constraints in respect of skills development. Within the context of Old Mutual, she describes programmes that integrate young learners early on in life. “We have kicked off a project taking highly talented and gifted learners who are top achievers in maths and English and sending them to schools where they can excel. We have introduced a programme offering bursaries to study at some of the model C and private schools, supporting them from Grade 8 to Grade 12. If their home environment is not conducive to them being able to achieve what they are capable of, we finance the boarding house option with the permission of the parents.” This kind of mentoring at an early age is so critical in building the country’s young leaders and professionals.

Her track record shows her commitment to these values. “Part of what I am very proud of in my own career is having had a small opportunity to train the first black cadet pilots. SAA had no black pilots. I was part of a team that looked at taking eighteen to twenty-five-year olds and launched the first Black Pilots Training Academy, training the first groups of cadets in Australia. Recognising potential in her current portfolio is an important aspect of Archary’s role as human resources director. But it goes beyond that. She also has to match aspiration with aptitude. “Ambition is not enough,” she insists. “You have to have capability, and a value set that must be a cultural fit with the organisation. Archary cites examples of people who have been proactive in their professional lives at Old Mutual, and have taken ownership of their success. “Marshall Raypia started as a sales advisor; today he is the MD of the South African business. Rose Keanly started in IT and now heads up Old Mutual Service, Technology and Administration. Tavaziva Madzinga, who began as an executive assistant, is today the CEO of our Kenya operation.”

Archary believes that the leaders who have distinguished themselves at Old Mutual are the ones who have a passion for customers. “We see a good leader as being in touch with the customer and employees. In addition, we know that we like our leaders to be very close the communities we serve, and many of them are.” She believes that this orientation towards the common good, to work beyond the organisational bottom line of profit, is the current trend in leadership development. However, as Archary points out, it is important to distinguish between those companies who do it for the public relations value, and those who do it because they are truly transformational in every sense. “I think what I like about Old Mutual is that our community embetterment orientation helps us with our corporate social investment; but people do truly believe that it has a place. It is part of the culture.”