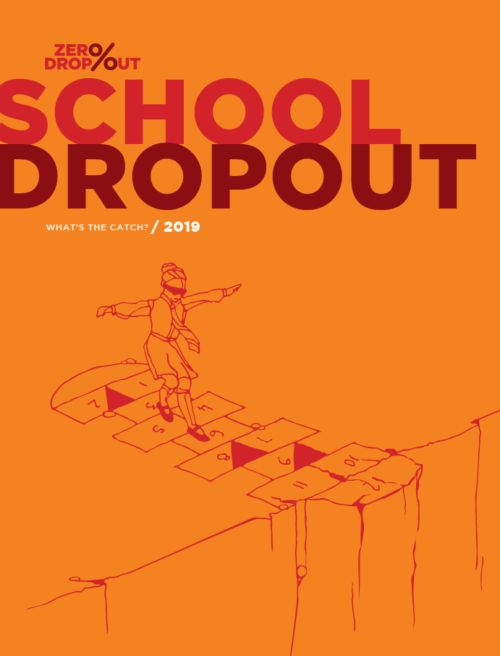 While almost every child starts school in South Africa, over 40% won’t ever get to even write matric, let alone pass it. With so much attention paid to the matric pass rate each year, this major failure of our education system has long been hidden from view – despite the fact that an under-educated population threatens not just the potential of individual learners, but the economic and social stability of the country.

Two out of five learners drop out of school before matric.

“While the overall matric pass rate has improved over time from 58% in 1994 to 81% in 2019, this pass rate only tells us the percentage of learners who sit down to write the exam and pass. It does not tell us what percentage of the cohort of learners who originally started in Grade 1 made it to matric and passed – that would be the ‘true’ or ‘real’ matric pass rate,” explains Merle Mansfield, Programme Director for the Zero Dropout Campaign at the DG Murray Trust (DGMT). She adds: “With the 2019 matric pass rate just released, it’s vital we make the distinction clear as the annual national matric pass rate does not consider learners who dropped out of school before or during Grade 12. When these numbers are considered, the true pass rate is much lower than the national one.” In South Africa, around 40% of learners drop out before they even reach Grade 12, and of those who do make it to matric to write their final exams, just 13% pass well enough to go on to university.

“To ignore those who do not make it through school, is to do so to our collective detriment – not just to the detriment of those learners,” warns Mansfield. Without finishing matric, or another NQF4 qualification, young people have very few career or livelihood options in South Africa. Young people without a matric are at highest risk of unemployment, and also stay unemployed longer than their peers; those who do find work are more likely to be in low-paid, unskilled jobs.

The vision of the Zero Dropout campaign is to halve the rate of school dropout by 2030. Towards this end, the campaign aims to put school dropout firmly on the national agenda by

This month – to coincide with the release of the national matric rates and, importantly, the beginning of the school journey for approximately 1 million grade 1 learners, the Zero Dropout Campaign has launched, School Dropout. What’s the Catch? “Drawing together the latest local and international research, as well as on-the-ground experience from learners, educators and programmers, the publication offers deeper insight into the nature, and drivers, of school dropout, because – despite what many people might think – youth who drop out of school have often been very committed to their schooling; their dropping out usually comes after years of struggle,” says Mansfield.

While the publication acknowledges that tackling the underlying causes of school dropout in the country – poverty and inequality – will require massive political commitment and policy change, it notes this will take time. In the meantime, it argues there are simple steps we can take to ensure learners are supported to stay in school, starting by recognising dropout as a national problem – one that demands urgent efforts at the school, community, provincial, and national level.

In addition to an overview of the key factors that either ‘pull’ or ‘push’ learners out of school, the publication outlines several key strategies that the campaign sees as critical to helping learners stay in school and, through real-life case studies, it showcases interventions currently being carried out by NGOs across the country with evidence of success.

“Every time a learner drops out of school, it impacts the fabric of our society. Yet another citizen will find it more difficult to participate meaningfully in the choices that affect their lives, to be a self-managing person, or to participate fully in the economy,” says Prof John Volmink, who contributed to the publication. “Our future will be determined by the extent to which we can address this pressing South African challenge. This is not just about supporting learners to finish school; it is about nation building. It is about ensuring a just, truly transformed and admirable society.”

Read What’s the Catch? on ISSUU below.  Download a copy here.

For more information or for interviews with Merle Mansfield, the Programme Director for DGMT’s Zero Dropout Campaign, please contact Corné Kritzinger at corne@dgmt.co.za or 021 670 9840.