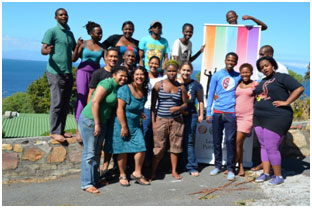 In January 2012 an ambitious new programme – Activate! Leadership for Public Innovation – was launched with the aim of building a network of young leaders from across the poles of South Africa that could collectively tackle South Africa’s biggest challenges. Last year 182 Activators completed the intensive residential component of the programme and are continuing on into the second year programme where they are capitalising on their skills, connections and innovations by deploying interventions and building the public profile of young people’s voices. Another 560 Activators have joined the network this year, putting the programme well on its way to reaching its initial target of building a network of 1, 000 Activators from across the country.

Activators cross the multifarious divides in South Africa: they are from small towns and big cities, from across socio-economic backgrounds, of different races and political persuasions. Collectively these young leaders are reshaping engagement in South Africa, building relationships and a collective purpose-driven identity. They are also coming up with big ideas on how to tackle South Africa’s toughest challenges. At the end of 2012 Activators pitched 66 projects at the innovation showcase, alongside a number of existing projects being ramped up or taken further.

One of the significant highlights of the first year has been the opportunity to interrogate the potential for a programme targeting behavioural preferences as a structural policy lever. A team of Associate Professors from the UCT School of Economics – Profs Justine Burns and Malcolm Keswell – lead a rigorous evaluation process designed to test the critical outcomes sought by the Activate! programme. The design of this evaluation using experimental games is a breakthrough in the work of measuring the impact of behavioural programmes, and may well set important precedents for the support of other work in the sector.

As Burns and Keswell argue:

Most policy discussions about South Africa’s “youth problem” implicitly assumes that the preferences of young people (for altruism, risk taking, the delay of rewards etc.) are exogenously determined: they are determined outside of, and are substantially unaffected by, the structure of strategic interaction or other substantive aspects of the economy. But this is generally not true. People bring their personal histories into interactions and this influences what they will do from situation to situation. Yet the extent to which pro-social behaviour is malleable from a policy point of view is in doubt. There is very little direct evidence of this (for South Africa or elsewhere). It is therefore not surprising that things like altruism and trust are never taken seriously as potential “policy levers”. The Activate programme offers a rare opportunity to study whether this aspect of (non-market) social interaction can be affected in order to effect changes to economic fundamentals.[1]

Some of the exciting key findings of the 2012 evaluation include:

As Activate! moves into its growth phase, we are excited about seeing Activators grab the opportunity to reshape how South Africa sees itself, and grapples with its social challenges from community-level up.