Tracking learners through school is our best bet against school dropout 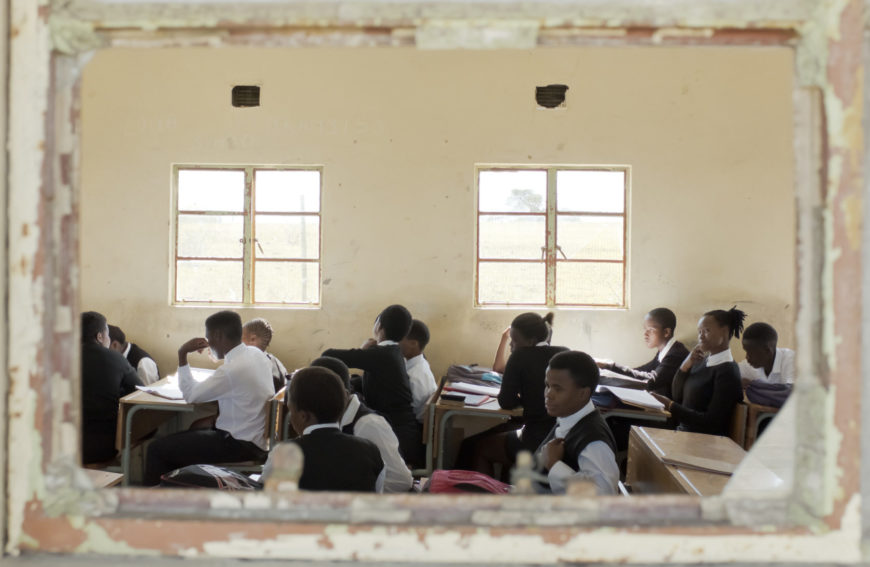 Better tracking of drop-out rates in South African schools is key to ensure that we understand the magnitude of the problem so that effective programmes can be launched to keep children in school and give them a better chance of a brighter future. Photo by Max Bastard. Taken at LM Malgas Secondary School, September 2018.

All eyes are on those who concluded their matric finals last week, while far too little attention will be paid to the alarming number of learners who left school before Grade 12. In fact, adequate tracking of dropout at school level does not exist in South Africa. To ensure more children reach matric, we need to identify those most at risk, so we can help them stay in school and en route to a brighter future. The Zero Dropout Campaign shows that better management of learner-level data can help address this education crisis.

If last year’s results are anything to go by, we can expect a national matric pass rate of about 78%[1]. That sounds great, but a closer look behind the numbers reveals a bleak picture. Of the group of learners who entered Grade 1 twelve years ago, around 40% dropped out before matric, 37% are likely to pass and only 13% [2]pass go on to access university immediately after matric[3]. The major failure of our education system – the number of children who drop out before they reach matric – is obscured by the annual national matric pass rate that dominates the headlines each year.

In South Africa, matric is still the gateway to further education, and with higher levels of education come greater chances of employment and higher income levels. Thus, it is in the interests of economic and social stability that we tackle school dropout, however, complex its origins may be. As research shows, dropout is not a single or instantaneous event, but typically the result of individual, family, community and school-related factors that build up over time. Tackling the underlying causes of dropout – poverty and inequality – will require massive political commitment, policy change and will take time. Fortunately, there are steps we can take now to help turn the situation around.

One of the most important changes we can make is to get smart about the data we collect. Lack of detail, poor input methods and siloed datasets mean we are collecting vast amounts of information about learners but not at the level of detail and in the manner required to signal when learners may be struggling. Current datasets tracking matric exam results, annual school surveys, and master school lists only provide information at the aggregate level; they cannot trigger warning signs at an individual learner level that would allow us to pre-empt the challenges that may lead to disengagement and eventual dropout; they do not paint a holistic picture of a learner’s overall journey through school.

The Zero Dropout Campaign believes that the monitoring of three critical indicators is required for an effective learner monitoring system. Based on UNICEF guidelines on Education Participation and Dropout[4], they are known as the ABCs: Academic performance, Behaviour and Chronic Absenteeism. Most schools already monitor academic performance. They can track if a learner is failing or falling behind if they have repeated a grade or were progressed[5]. Learner behaviour that is disengaged or disruptive is another clear indicator but is not mandatory for schools to report on. For example, teachers know when a learner is not responsive in class, not interacting, not handing in homework, but they are not required to capture this information anywhere. Typically, we respond to extreme cases, or when there is an incident of violence, for example. Responding to incidence only limits the opportunity to understand learner behaviour and what is causing it, which creates a greater likelihood for corrective action.

The more time that children are absent from school, the more disengaged they become and the more likely they are to drop out. National policy states that if a learner misses 10 consecutive days of school unexcused, they will be deregistered. But, learners often drop out for a few days, drop back in for a week, and then drop back out again. The total of these sporadic absences may exceed the 10-day limit, but because the days aren’t consecutive, no action is taken. Moreover, inadequate tracking means these learners go unnoticed.

When testing the ABC Early Warning System in the South African context we discovered a number of challenges, however. Some were similar to those found internationally, including difficulties ensuring that indices were the same across regions, that the data was accurate and detailed, and that there were sufficient technology and skill to run the information system.

The pilot also revealed a problem with information at the learner level. The education minister recently critiqued the available statistics on learner dropout, but there are ways to make it more accurate. While academic results are collected by schools, and form a relatively accurate dataset, to protect learner privacy, this information is not available to researchers at the learner level. A unique tracking number to identify learners is a way to access data and do longitudinal tracking, while still protecting learners’ anonymity. In this way, it will, for example, become clear whether a learner has dropped out of school or has simply transferred to a school elsewhere.

In January the matric pass rate will be publicly shared and celebrated, but in the hoo-ha, we should be sure not to forget that the hopes of more than 40% of learners – even in the Minister’s conservative estimate – were dashed before they could reach matric. Better tracking systems will not only help us to be more accurate in understanding how many hopeful Grade 1s make it to the matric exam twelve years later if we act on the early warning signs exposed in the data, but it might also even help more of them to do so.

This op-ed was first published on 07 and 08 December in the Independent on Saturday, Pretoria News, Saturday Star, Weekend Argus and the Sunday Independent.

[5] South Africa’s policy on progression is that a learner cannot spend more than four years in any phase. This means that a learner who fails a grade for a second time, cannot be retained in that grade, but must be allowed to progress to the next grade.