Having worked my way through the DG Murray Trust’s latest issue of its annual publication, Human Factor: Young People Open Minds, I decided to apply my open mind to the difficult topic the issue took on, which was young people’s individual and collective identity formation in our country. The publication delves into the complex lives as well as the internal and external conditions that define the lived experience of youth.

Nearly two-thirds of South Africans are under the age of 34. A nation of youth, we are a country in transition, a country in search of itself. Beyond our youthful demographics, there are demonstrations that we are grappling with our collective identity elsewhere in the body politic.

We are still struggling to navigate the journey from the nightmare of our racist past (and present) into a vision of an antiracist future. We are trapped in a purgatory between. While in-between-ness plagues us all, this is especially pronounced among young people.

Youth as a liminal period

Elsewhere on our continent, generational fault lines have rendered “youth” a politically usable category beyond chronological and biological definitions. Youth represents a grouping of people in a transitional period, in which age alone does not signal the arrival to adulthood. As a comparative category, youth then signals what one is not (i.e., not above a certain age, not yet employed). The liminality of youth makes it a category full of tensions.

Although ambiguous, adulthood has certain markers of arrival, including economic independence. These shifting goalposts to adulthood matter because the national economic prospects across the continent hamper the possibilities for young people.

Youth in South Africa face a similar crisis of social reproduction — the reproduction of social inequalities throughout generations. Covid-19 has only amplified a dismal economic situation. The 2020 National Income Dynamics Study-Coronavirus Rapid Mobile Survey showed that in just three years between 2017 and 2020 the number of South Africans living in the lowest income bracket has grown by 54%, and the lower middle class and upper-middle class have declined by 44% and 50%, respectively. The constriction in access to resources has material and social implications for young people.

Against this backdrop, including the unsustainably of high levels of school dropout, high youth unemployment and HIV prevalence, it can be hard to see the youth’s inheritance of racial inequity as necessarily urgent and significant. But it is.

Structural racism in South Africa means that these indicators disproportionately affect black youth. Adding to the failures of the education and health systems to black and other young people of colour, when they do have access to integrated schools – which have often been the marker of progress – black youth often face recalcitrant institutional racism. From Rhodes Must Fall to the student protests at Pretoria Girls High over discriminatory hair policies, and the segregated Grade R class in Laerskool Schweizer-Reneke evidenced in a photograph that surfaced – young people still find themselves embroiled in and living with the legacy of apartheid.

As a group that is actively becoming, young people are especially attuned to identity markers, group dynamics, and social meaning. Their personal identity formation takes place in concert with the wider social milieu – including the ruinous racial hierarchy.

Instead of a tabula rasa, South Africa is a palimpsest for each generation.

Reflecting on what it means to come of age in post-apartheid South Africa as a young self-described Afrikaner, one of the contributors to Human Factor, Francois Lion-Cachet noted that “we do not live in a ‘new South Africa’ but in apartheid’s continuum.”

Author Clinton Chauke similarly contests the label of being “born free” in his book, Born in Chains: The Diary of an Angry Born-Free. We overstate the disjuncture from the past at our own peril. Young people feel that it continues in a pronounced way.

Where previous generations of black youth faced a brutal system in which freedom was not promised, today, freedom is not only promised, it is all but guaranteed – and yet not delivered.

Where the older generation was consigned to an unrelenting racially subjugated world, we are caught between two worlds: one that remains racially deterministic and another of unheralded freedom. We are haunted by how things were and are lured by glimpses of how they could be. For now, the new and the old collide.

We can smell freedom, but as a collective, we rarely grasp it. Ours is a pain of elusive proximity.

What is true for young people is true for South Africa. We too are a country caught between worlds. Nowhere is this more visible than in our racial experiences: the Senekal protests, the Clicks haircare advert, the framing of farm murders as genocide. We are a country in convulsions.

Yet, somehow, the distinguishing feature between our country’s youth is the presence of hope. Not the euphoric rainbow-ist hope of the 1990s. Young South Africans are hopeful in a way that defies the pervasive politics of apathy. And perhaps that is their biggest gift to the country.

Our country’s young poets, artists and activists defy despair by harnessing the imagination to process their identity inflection point – and incidentally, our own at the same time. For example, when performance artist Sethembile Msezane, embodying a Chapungu taking flight (a Zimbabwean eagle of spiritual significance that the colonial powers appropriated), was photographed in the same frame as the falling Rhodes statue, she gestured that full freedom and a more human justice can rise from the ashes of pillage and pain. 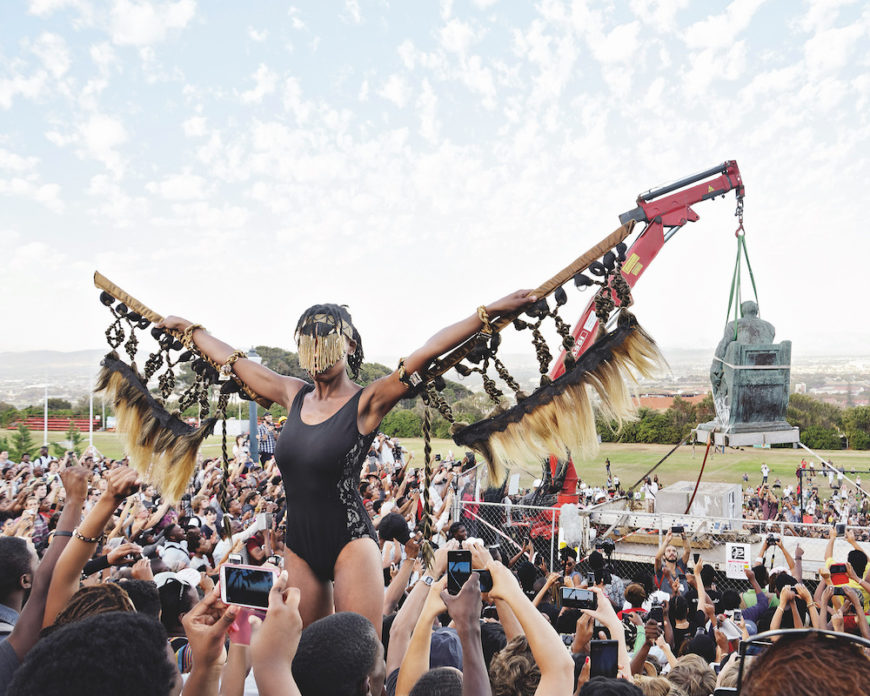 For just under four hours, Sethembile stood with a beaded veil, wings made of hair, a leotard and stilettos embodying the Zimbabwean bird Chupungu on the day that a statue honouring Cecil John Rhodes was removed from the University of Cape Town during student-led protests. This performance piece represents one of eight soapstone birds that were taken from Zimbabwe during the colonial era and given to Cecil John Rhodes. As the Rhodes statue fell, she lifted her wings in a gesture that gave many hope Africa would overcome its colonial past. Sethembile Msezane Chapungu – The Day Rhodes Fell, 2015

What young people facing the struggle to become can grasp is the instinct to define themselves. That invention of self is both a creative authorial act and one of accountability.

There may be no playbook for coming of age in a country in an identity crisis, but where there is no example, young people will show us how.

Sebabatso Manoeli is Senior Director at the Atlantic Fellows for Racial Equity.

This op-ed was first published online by the Mail & Guardian’s Thought Leader on 19 February 2021. Read it here. 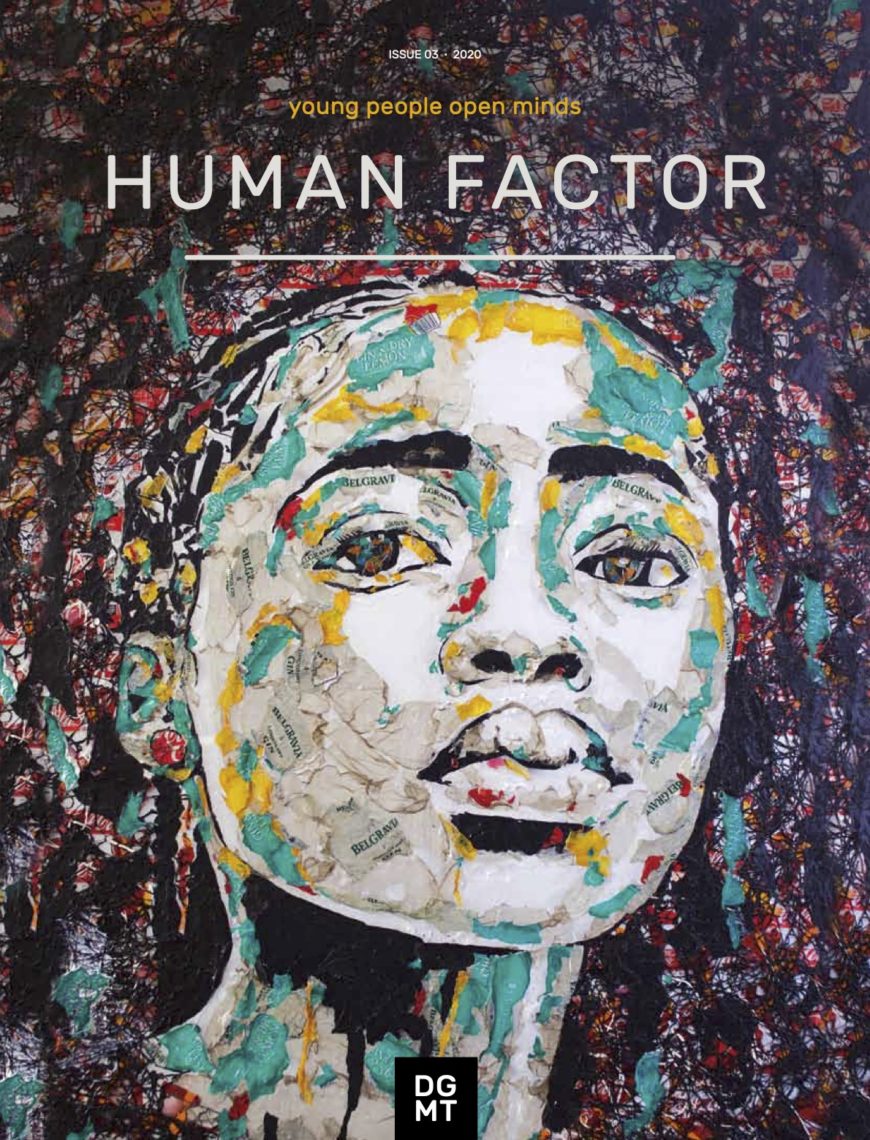 The third issue of the Human Factor helps to weave a tapestry of tales about young people in South Africa, giving the spotlight over to them by featuring their words and their art. Working on this issue kept us hopeful during difficult times in 2020, we hope it can do the same for you in 2021. Click here to read the Human Factor and visit the dedicated site.