It all started with a presentation to our board by the editor of the Cape Times, Alide Dasnois in November 2012.  Her presentation was thought provoking – it presented Cape Town through the lens of inequality.

With a Gini coefficient[1] of 0.67, Cape Town mirrors the income inequality of the rest of South Africa.  Of course inequality is not only reflected in income. We see it also in access to services and quality of life as is reflected in indicators such as adequate water, sanitation, power supply, transportation, road networks, communications technology. Alide suggested that we needed to create a city-wide initiative that everybody could feel part of, and the DGMT CEO, David Harrison took the holidays in December to mull this suggestion over and to conceptualise what such a city-wide project might look like. 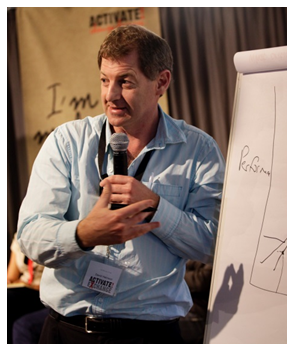 David would not like me to say much about him, but being a lead character in the story of Cape Town Embrace, he nonetheless needs a short introduction. I won’t go through his CV which, although impressive, speaking to a number of successful and well known NGOs and initiatives being founded and lead by him, is not what is relevant here.  What is important is what you read between the lines of his CV and discover when you work with him.  He is a creative maverick with a deep understanding of the social conditions in South Africa.   His ability to provide perspective to others on really, really difficult issues that tend to leave us despondent is remarkable.  He sees the possibility of a path where we see only wilderness, but more impressively, he is able to inspire and lead people to take on that wilderness and to make the path.  This is exactly what is happening with Cape Town Embrace:

“I have a real interest in trying to understand the relationship between structural inequality – the spatial, the concrete, the distribution of money, services and so forth – and the way people behave,” says David in my interview with him. He continues: “So for example, we know that structural inequality lead to high rates of crime, of HIV tolerance, of domestic abuse, of alcohol abuse etc. If one can start to address some of those social factors I think that it can impact positively on structural factors.  An empowered community that has clear leadership and a sense of social solidarity can begin to act as a source for good, and can overcome some of the marginalisation that the community experiences.

In a way that is at the heart of this initiative – given the structural inequality of Cape Town and particularly the fact that it is so entrenched and so difficult to change because of where communities are geographically situated and the way roads are laid out et cetera; it is very, very difficult to change it. Cape Town holds pockets of extreme wealth and pockets of extreme inequality where you get people feeling incredibly marginalised, incredibly excluded – and high, high rates of all sorts of social ill.

So the starting point was to say – can we create a social intervention that begins to create bridges between marginalised and wealthy or better resourced communities – and in doing so enable people to feel more included and start to create a more cohesive community? Essentially it is about connectedness for the city and my feeling was that we needed to find common ground – and common ground that would not be immediately hijacked by politicians – so it could not be a service delivery issue. It could not be around water, sanitation et cetera because that is highly contested. But the one area where there is commonality, where there is a convergence of interest, is in the welfare of our children.  So the notion was to frame this project in terms of protecting the future of our children, specifically those born in 2013 -2016 – to use that as the central focus for a project that is ultimately aimed at achieving greater social cohesion and connectedness, at the same time hopefully improving the child outcomes”.

This was in the back of his mind when he came back from the December holiday, sat down and wrote the six page concept document for what he called, the Cape Town Great Potential Project.   Following is a short summary of this essential concept (you can download the full document below this article):

Project Aim:  To substantially alter the life prospects of the half of the 75 000 children born each year in Cape Town who would otherwise have limited access to opportunity, by connecting and building the relationships between the people of Cape Town  who are currently divided by social and economic circumstance.

Project concept: This project will use relationship and connection to reduce divisions and fragmentation in the whole Cape Town community through a focus on creating “connections to opportunity” for children who would otherwise have limited or no access due to poverty and related social ills.

Individuals would be mobilised through faith-based organisations and service organisations to establish a personal connection to the parent/ caregiver of one child born in that year.  The required commitment would be to ‘look out’ for the interests of that child (to the extent that he or she was able) through:

Note though that the primary axis of connection will be between the parent and the ‘connector’, and not the child.

The faith-based or service organisation to which the ‘look-out’ is affiliated would:

The Community-based Family Support Agency to which the child/family is affiliated to:

Central hub with links to other institutions

The small central hub would:

One major newspaper (The Cape Times) and one major radio station would be approached a primary media partners to:

Systems of referral (for malnutrition, abuse identified etc.) will need to be set up.

Similarly, systems of monitoring to minimise risks to children (eg. interest by paedophile groups) will be put in place.

Despite the ‘great potential’ of the envisioned project, it’s a difficult concept to get your head around. The DGMT Board of Trustees is very open to out-of-the-box ideas; nonetheless, it was going to be a tough sell.  In the next article we relate David’s efforts to get the board ‘on board’.

[1] A measure of the inequality of income