A little piece of Heaven – Towards A Rural Based Industrialisation 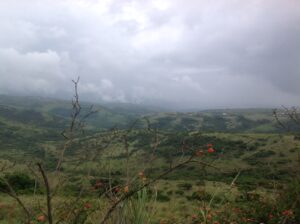 Late last year, a small DGMT team set off for the little coastal nook of AmaJingqi Village, home of Chief Dumalisile. It all started with a letter which landed in our CEO, David Harrion’s inbox, from the Chief himself, explaining his 30 year plan to develop and industrialise his village, and which so succinctly revealed a ‘because we can’ approach from the chief and his people which is the key to successful development. This letter and the associated development plan are also also remarkable in their grasp of complex developmental contexts which clearly showed that this the village is serious. It is said that well laid plans can make or break things, and these plans from ECD efforts to systems of Import Substitution Industrialisation indeed showed that this community initiative has been well thought out. The struggle between ideas of global capitalism and nuclear little autarkic economies has been raging since the dawn of economic time, with the former normally taking on the role of the extractor but still generating the profits on which most economic growth has been based, while the latter, although virtuous in its simplicity and self-sufficiency has never really even got off the starting blocks, if anything, attempts have homogenized everything from the starting pace to the ending pace, and if it ever did succeed, sells out at the first sign of profit. But whether it be the infamy gained through misapplication, or the natural tendency of each, both leave much to be desired when it comes to communities and individuals, and as Dani Rodrik[1] so clearly explains, the answer might lie in taking and mingling the best principles of both. This is something which Chief Dumasile’s plan does with great understanding of the subtleties!

After three hours of David’s quick and efficient driving, we hit the dirt road off the N2 into the deep greenery of the Eastern Cape coastal hills. It is hard to imagine industrialisation taking place in these reaches, distances tripled by hills and logistics growing with impossibility as we headed coast-wards. Yet nothing is impossible, and indeed it is not geography which determines development potential! There is no doubt that a key link missing in the development of SA is the failure to develop where people live[2].It is the reason we have failed to develop where we arguably have strength, that is in agriculture; it can be blamed for the migrant systems which lead to peri-urban poverty increases; and it can explain much of the failure for South African’s to develop social cohesion through sound and united family units. Should Chief Dumalisile’s plan work, it might indeed pave the way for a whole new context in economic development which might just reveal a path to improvement for many. We began with an invitation into the Chief’s meeting place where we were served refreshments and where we met many of the village elders and members of the Chief’s family.  Leonie, Carol-Ann, Sandra, Piliswa, David and Martin from the German Development Bank were greeted with real hospitality and a welcoming introduction to the plan, before being taken to the Church hall to speak to the community and to gain a greater understanding of the challenges which we aim to help the community address. As we all stood up to speak and to listen, the room filled with more voices and we were all given the opportunity to form portfolio teams as we tried to present solutions. The plan shows great promise and although, at times, everyone in the room was a little lost in translation, there was a strong sense of common understanding. Time will tell whether the change will be realised by all, and whether or not we are able to help this community to overcome significant logistical challenges, however this was a really positive start to a truly exciting and novel long term commitment which left us all feeling inspired, and (arguably thanks to David’s driving) – very much alive!