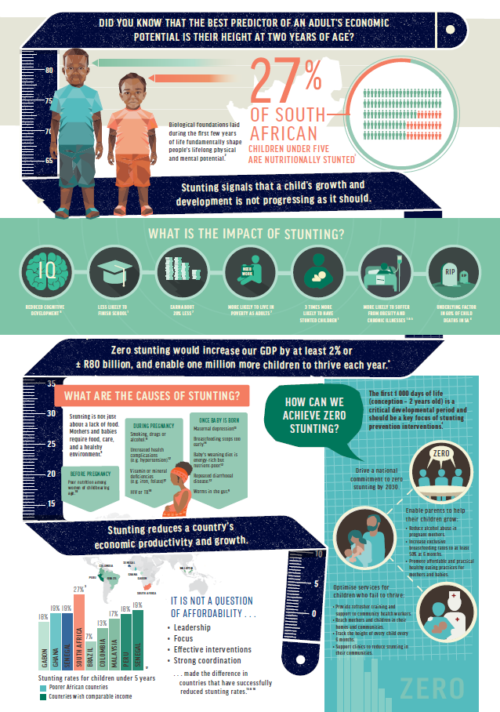 When we think malnutrition we tend to think of emaciated children struggling to survive, but malnutrition is also the cause of stunting – a largely invisible condition that is starving the economy by preventing our children from reaching their full potential.

The recently published South African Early Childhood Review 2017 reinforced the fact that we will never tackle inequality effectively if we do not support the growth and development of our children. There is one injustice in particular, one potent manifestation of South Africa’s persistent poverty and inequality, that exemplifies our failure to unlock human potential and economic growth. That injustice is the astoundingly high levels of nutritional stunting in South Africa.

Some people are naturally short, but stunting specifically refers to children who are short-for-age as a result of insufficient food over a long period of time. Twenty-three years into democracy, and many nutrition programmes and child grants later, the prevalence of stunting has remained stubbornly high. According to the recent South African Demographic and Health Survey, 27% of children under five suffer from stunting in the country. Their growth is delayed, and their brains aren’t developing as they should. This is a disgrace. One that everyone should be talking about, but few actually know about.

Unlike malnutrition and starvation whereby children may appear physically thin or wasted, stunting often goes overlooked. While the most obvious feature is short height, stunting extends far beyond physical measurement. Childhood under-nutrition – particularly in the period between conception and a child’s second birthday, or the first 1 000 days of life, leads to stunting. The damage incurred during this critical period of development is largely irreversible. Stunting can negatively affect a child’s brain function, organ development, and immune system, which can result in poor achievement at school, decreased productivity and earnings in adult life, greater risk of developing obesity and diabetes later in life, and ultimately, diminished chances of escaping the cycle of poverty.

Poor nutrition is a symptom of the intractable problems of poverty and inequality. However, as poorer nations in parts of Asia and South America have shown us, stunting can be reduced through a series of simple and proven steps. Take Peru, for example, which has been able the break the cycle of poverty perpetuated by stunting through countrywide engagement, strong political commitment and good policies. According to an article published by The Guardian in 2016, Peru reduced stunting in children under the age of five by more than 50% between 2007-2014. In his paper Analysing Success in the Fight against Malnutrition in Peru, political scientist Andrés Mejía Acosta argues that the success was achieved through coordination between government ministries, regional governments, health professionals and NGOs to focus on specific goals and targeted policy efforts, which recognised that malnutrition is a multifaceted problem.

So not only is stunting a solvable problem and achievable with South Africa’s resources, the cost of the interventions needed to tackle stunting would more than pay for themselves in increased productivity. As the World Bank has estimated, childhood stunting reduces an individual’s lifetime earnings by more than 10%. Zero stunting would mean that one million more of South Africa’s children would be able to thrive each year – and increase our GDP by approximately R80 billion!

It is for this reason that, together with other funders, the DG Murray Trust (DGMT) is launching a national Zero-Stunting Initiative committed to halving stunting in the next decade. Based on international experience, the recommendations of the Department of Monitoring and Evaluation (DPME) Report, and the new policy on early childhood development, the opportunity is ripe for consolidating South Africa’s nutrition efforts towards a single goal of reducing stunting. The initiative aims to mobilise a joint response from State, civil society and business to: 1.) ignite awareness around stunting and drive a national commitment to reduce its prevalence; 2.) support targeted behaviour-change campaigning to enable parents to help their children thrive; 3.) and optimise health and social services to prevent and respond to stunting.

While maternal and child nutrition is the starting point to breaking the cycle of stunting, this does not mean the responsibility rests with mothers alone. Every South African has the opportunity, and the duty, to help prevent stunting. With exclusive breastfeeding rates for babies under six months at only 32% – one of the lowest rates in the world – we need employers to ensure they provide a time and place for mothers to express milk, during their workday, so they can provide their babies with breastmilk, even if they cannot be with them during the day. We need society to provide safe environments for young girls to access family planning services, and educate them about their rights and choice of whether and when to have a child. Communities can support and educate pregnant women about the dangers of smoking, using drugs and alcohol during pregnancy, which have also been found to contribute to stunting. And government can ensure all required clinical services are accessible to all women of reproductive age and children.

There is a Zulu idiom – inkunzi isematholeni – the bull is among the calves. Our young bulls, the wise and valiant leaders of tomorrow, are the children of today, the babies in our arms, and the babies yet to be born. There is nothing more pragmatic and economically sound, than to invest in the health and development of the children who will shape our nation’s future. We know what must be done, and we can do it, starting by recognising where we are at: “We are South Africa. And we have a stunting problem.”

First published in the Star and the Mercury on 20 November 2017.