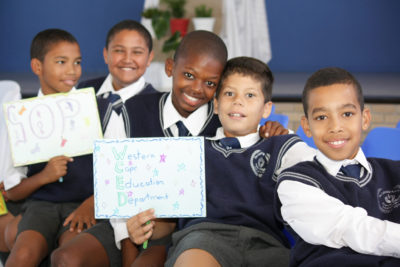 Is every non-State institution a private company driven by profit and neoliberal tendencies? This is the question that critics of public school partnerships need to answer.

Almost all criticism of the Collaboration Schools model being tested in South Africa fails to make the distinction between civil society organisations and for-profit companies in public education. These critiques are often based on desktop reviews that zigzag the world cherry-picking the bad and the ugly from a range of disparate educational interventions that ostensibly share the selfish gene of privatisation. Imagine if we applied the same approach to a global review of public schooling. Our assessment would either be glowing (if we focused on the likes of Finland) or damning (countries of our own ilk)!

Healthy scepticism should be the hallmark of public innovation, because that is good science. However, we cannot apply binary logic to the organization of complex systems like health and education. We then resort to processing new ideas with an ideological sorting hat, leaving us morally smug but no closer to practical solutions. Consequently, civil society groups like Equal Education find themselves in the rather awkward position of championing government as the sole provider of quality education, while railing against its failure to do so.

The DG Murray Trust, which I represent, is one of the funders promoting the idea of public school partnerships as one way of turning around failing schools in South Africa. In the model being tested in the Western Cape (Collaboration Schools), civil society organisations are funded by Government to manage public schools. To be clear, these are non-profit organisations – not commercial companies – working in schools where no one could possibly come up with a business case to make money.

Civil society organisations (CSOs) have a rich history of involvement in education in South Africa before 1994. Think about the role of church schools and many other grassroots organisations that were a foil to Verwoerdian designs of ‘Bantu education’.  Post-1994, there was an expectation that the Government would, on its own, provide high quality schooling to all. Like other social sectors, this has not happened.

Consequently, many CSOs started to provide direct teacher and learners support to public schools, but are regarded as extraneous to the system. Sometimes this support works, sometimes it doesn’t – because the arrangements depend entirely on goodwill. There is no two-way accountability. The CSOs move in or out as they want, and the school chooses whether or not to accommodate them. To use an economic term, the underlying fundamentals of the school system rarely change. Through these arrangements, private foundations and bilateral agencies throw billions of Rand a year at schools, with relatively little to show for it.

Our view is that the South African education system is so dire, so destructive to the lives of millions of young people, that we must be willing to try new ways of doing things. Yet too often we hear the tired phrase that ‘change takes time’, and that the educational system will take several decades to improve. Tell that to a child entering Grade 1 today who still has less than a 50% chance of completing Grade 12!

One could subscribe to the view that we have to write off this generation as the last direct victims of apartheid – and place our hope in the next. That hope would be misplaced. According to Statistics South Africa, the percentage of black African workers aged 25-34 years of age who are skilled actually declined from 1994 – 2014.  At best we’re stagnating, but we may in fact be going backwards. Our argument is not that that ‘desperate times call for desperate measures’.  On the contrary, desperate times call for cool heads and clear vision, because they sometimes present an opportunity to reset the trajectories of human development.

A crucial insight of the National Development Plan is that government cannot do it alone, and called for all sectors of society to work together in innovative ways.  This was not a reflection on poor government, but an understanding that the task is so big and the scarce-skills pool so distributed that we need to work in partnership. Furthermore, equating the private sector with the corporate sector diminishes the place of civil society. How will we ever give effect to the partnership aspirations of the National Development Plan if every attempt at cross-sectoral collaboration is tarred with the commercialisation brush?

Public school partnerships aim to draw in expertise into the public system, with a high level of mutual contractual accountability so that there can be no excuses for under-delivery. This means formal participation in the governance and management of the school – sometimes with a majority vote on the school governing body, sometimes fifty-fifty. It also means that the school operator is judged on learner outcomes.  Even then, parents get to invite them in and kick them out.

The assumption is not that private provision is better than public schooling. Certainly, that is not our premise. Our premise is that there are at least five thousand schools that slowly but surely suck the life prospects out of their learners – and that nothing but an intensive and sustained programme of direct school support will begin to turn this situation around. The question is how. How can South Africa provide a programme of horizontal support to failing schools, of sufficient scale and duration, to create real possibility that the children there might be able to succeed?

Pro-poor financing policies have not achieved it, neither has circuit-level managerial oversight.

Certainly, money is a big part of the problem. Former Model C schools derive most of their revenue from fees and other contributions in cash or kind from wealthy communities in which they are situated.  The State top-up for Quintile 1 – 3 schools is tiny in comparison, and most have to make do with less than a tenth of the discretionary income of Quintile 5 schools.

But the problem is not just money. Poorer children often lack the nutritional, linguistic and cognitive foundations for learning. They are harder to teach – and then they are taught by poorly trained teachers who are inadequately supported, in dilapidated schools in which poor leadership is further stifled by bureaucratic cultures of compliance.

Changing these fundamentals needs a wider strategy than just school level intervention.  It requires systemic change, but not only of the educational system.  Currently only a quarter of our children are exposed to quality early learning by the time they go to school. A fifth of children under five are nutritionally stunted.  Foetal alcohol and tik play havoc on the brain development of many others.  These deficits provide real opportunity for turning the education system around – if there were universal coverage of early childhood development, if we were committed as a nation to zero-stunting, if mothers at risk of toxin abuse received early counselling and support.  These goals are attainable, and could dramatically improve learning outcomes if children then entered schools that capitalised on their potential.

But then the fundamental problems in school must be tackled. We hope to bring new life into seriously underperforming public schools through the introduction of new capacity, new flexibility in terms of human resource management and budgeting, and outcomes-based accountability. This partnership is designed to strengthen and help revitalize the public system, and every aspect is designed to build accountability and achieve sustainability

The reality is that there are already public and private elements in both government and independent schools. It is private money in former Model C schools (in the form of school fees), often in excess of the total State allocation, that enables them to perform as well as they do. Does this make these schools more ‘public’ or ‘private’?  On the other hand, the State subsidises non-profit low-fee independent schools by up to 60% of their per-learner costs – yet these schools are deemed to be private. Our view is that when the State responds to ensure the provision of basic education by financing a school – in part or in whole – that school should be regarded as part of the public system of provision.

Critics object to the fact that the Western Cape is already implementing legislation to facilitate the Collaboration Schools. At the same time, they express scepticism that local efforts will bring have any impact if not supported by systemic change. We agree that social innovation rarely comes about through test-tube experiments and local modelling.  It must be embedded in the system from Day One, and that means reticulation with circuit and district offices, clear lines of provincial accountability and an enabling legislative framework. Only when these are in place, will we possibly know whether the innovation improves the system or not.

There are other promising models of school-strengthening that don’t go as far as placing schools ‘under new management’. An example is the Programme for Improving Learner Outcomes (PILO) in KwaZulu-Natal, where one of its major breakthroughs has been to obtain the endorsement of the trade unions. This model could prove more effective.  We just don’t yet know – and we need to be testing a variety of strategies for radical school improvement.  In all of them, we’d expect the same ‘healthy scepticism’ until they’ve proved their worth.

Having said that, we cannot only be interested in weighing up remedial actions to get schools over the pass/fail line. We must have a vision of an education system that primes young people to participate fully in an innovation-driven economy. In this new world, there is a celebration of diversity. Civil society is given its rightful place as a full partner at the table with business and government. People are valued for their skills, not their sectoral bases. Government is an enabler – ensuring provision of quality education for all, but harnessing the talents and skills of government employees, civil society and even private providers. Job security is a lesser goal than job satisfaction, and the creativity and tech-savviness of young teachers complements the wisdom and experience of older ones.

The point here is that some of the features of public-private partnerships that are often cited as downsides – a more flexible workforce, younger teachers making better use of technology, and greater interaction between industry and education – may well be drivers of an innovation economy. Ironically, those who regard themselves as the custodians of education as a public good may ultimately do children a disservice if their indiscriminate analysis perpetually sees risk instead of opportunity.

David Harrison is the CEO of the DG Murray Trust