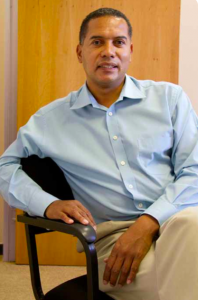 By Jackie Lagus, based on an interview by Anna Morris.

As programme manager of the Western Cape Education Foundation, a public- private partnership, Blauw believes that one of the most effective ways to develop leaders is through mentoring learners – particularly in disadvantaged communities, where young people need a sense of hope. “They need people they can relate to and identify with, who come from their background, to motivate and encourage them,” Blauw says.

His own rise to leadership – from teacher to department head and deputy principal to his current post as programme manager – has been built on the groundwork of trial and error, experience, learning, and ultimately, self-motivation. Blauw admires visionaries: those men and women who are able to identify the bigger picture and use their passion to bring about positive change in the lives of their employees, staff, families and communities. He is inspired by such leaders as Professor Jonathan Jansen1. “Ethics, reliability and integrity are very important as well,” he adds. “I particularly admire leaders who have entered the business environment and turned it all around, from a good organisation to a better situation.”

It is this kind of transformation that Blauw is hoping to bring to under- performing schools in the Western Cape. His holistic vision encompasses both education and mentoring. Blauw envisions bolstering the Education Department’s existing programmes, such as the Representative Council of Learners (RCL) and peer education programmes, with development initiatives aimed at fostering a new generation of leaders.

His transformational strategy seeks to overhaul years of social engineering that undermined, rather than encouraged, greatness.

“I am passionate about youth leadership, and very passionate about leadership development for disadvantaged learners,” Blauw says. “I want to see their life situation change.” He believes that the right opportunities, mentors and role models can offer learners hope for a future that is unlimited.

In Blauw’s view, it is critical to help raise people’s expectations of themselves by showing them what opportunities are out there for them. This means access to information, and people with the talent and time to offer an alternative perspective on the world. But it also requires commitment and dedication from the learners themselves.

“What we are particularly trying to do now is help these learners take responsibility and ownership for their own learning,” Blauw explains; “for turning their schools around, for coming to school on time, for doing their homework. These basic things will help make a more successful school.”

Ultimately, he proposes, it is about learning to be accountable. But at the same time, learners need an unwavering belief to buffer them from others’ negative opinions and the self-defeating patterns that can create pitfalls along the way. Using successful sportsmen and women to illustrate his point, Blauw reminds us that “any successful sportsman will tell you that you need to have tenacity – the winning spirit – if you want to be successful in the sport. Many of our previously disadvantaged sports heroes have demonstrated these qualities,” he points out. “The intellectual ability – some of them might not have it; it might not be there. But if you question them, you will find that these key traits – a good work ethic, resilience, self-belief, a can-do attitude – are what make them stand out above the rest.”

By mainstreaming leadership programmes through the RCL and peer education programmes, Blauw hopes, among other objectives, to teach learners how to build successful campaigns and create tangible project outcomes. The RCL comprises mainly high school students who are elected annually, and who represent the school before the teachers and the governing body. “The Department is trying to strengthen those RCL structures in schools,” Blauw reports. “This is happening through the appointment of a teacher liaison to work with the RCLs, supporting the learners with conferences, budget allocation and the preparation of training materials.”

The peer education programmes are also aimed at giving learners access to counselling or assistance with homework and projects. The Foundation provides additional funding to support and boost resources for the programmes where there is a shortfall from the department.

Blauw has helped develop training materials designed to cultivate a generation of leaders who come from difficult circumstances. He has done this by integrating his own knowledge, acquired through postgraduate studies, and by using the lessons learnt from other leaders who have turned disadvantage to triumph.

“The crucial thing about developing leaders is about an understanding of where they come from, who they are; instilling in them an acceptance of who they are,” Blauw believes. “Their self-worth, their self- confidence – that, for me, is crucial; because once they achieve leadership positions in an environment that they really want to be in, they have to be able to hold their own and understand where they come from.”

Blauw has been gratified by the enthusiasm and talent he has witnessed first-hand during his visits to schools in the poorer areas. Nonetheless, he acknowledges the challenges learners face from their peers and educators. “I have sat in discussions and conferences, and engaged in little group discussions with them,” Blauw reports. “They would share their dissatisfaction with teachers who are not paying attention to them as leaders. They would talk about the challenges of peer pressure in not being accepted as wanting to be leaders.”

Blauw believes that it is critical to instil in these young learners the recognition that it is not going to come easy; that throughout life, they will be faced with the attitudes now prevalent among their peers. They will have to learn how to deal with remarks such as, ‘Why are you doing this? What do you hope to achieve? You are not going anywhere with your life, in any case!’ In Blauw’s view, such discouraging feedback should be used to reinforce, rather than weaken, aspiring learners’ commitment. “My philosophy of leadership development is about strengthening the self,” he says, “strengthening the child to be resilient, to be able to deal with that.”

Blauw acknowledges the importance of the support system at home, the teaching environment and positive role models. These must work in concert with the Foundation’s own broader vision and overarching aims, which are to improve quality education with the assistance of the private sector. As an organisation, the Foundation’s aim is to enhance and coordinate the positive energy that prevails in the business environment, and collaborate with civil society to improve the province’s overall educational standard and culture of learning.

Blauw believes that an important component in the ongoing effort to reach learners is technology. “What we would like to establish is a web link where learners, pupils and young leaders can interact with each other through social networks,” he ventures. “We have a long way to go in that area, but we would like to establish that. Part of our training was to survey learners on technology, because then you can start communicating internationally – communicating with the schools in your area, with your friends or learners in your area.”

Similarly, technology can be a tool in bridging the wide cultural divisions within the province. “I would like to see more cross-cultural programmes that bring the different cultures together,” Blauw reflects.“I think we are still very divided in the Western Cape. There may be pockets of initiatives happening, but I would like to see it on a grander scale – more cross-cultural, inter-racial leadership initiatives.”

Blauw feels that the divisive social engineering that led to segregation of racial and cultural groups in South Africa has struck deep at the heart of people’s inherent belief about their potential. The idea that certain areas of industry or study were off limits meant a generation of learners missed out on becoming great scientists or mathematicians. “The area of science is another passion of mine,” he reveals, “getting learners interested in the field of science. The social engineering of the past has contributed to our learners’ lack of confidence that they can do science and mathematics, that they can become scientists.”

Blauw sees the solution to this partly in learners having role models from their own communities. “We know a lot of Einsteins, but who are the people from the African continent who are doing great things in the world of science? Our children do not know about them. We must change the material, we must change the literature to reflect that. Then they can see that, ‘Wow! Someone from my community is achieving in the world of science, which I thought was out of my reach!’ Once we have started introducing them to that – that this is possible – then we can start addressing it.

They just have to believe it is possible that they can also do that.”

Believing in the possible and not being daunted by the odds are what propel Blauw to not only create a better life for himself, but to change the world for those around him. True to his leadership philosophy, he is not waiting for someone else to make the change. “I think the experience that has shaped me the most is working in a school environment,” he says: “working with learners, with pupils; seeing the potential, and realising that not enough is being done to nurture that.”

Blauw’s ultimate message to those of us who share his vision of empowered leadership: “Our young people in disadvantaged communities need you to mentor them. They need a sense of hope.”