Providing a multi-faceted package of support to young people

“Even the ants are [more] alive than me. They are always busy collecting food in preparing for tough times. … I am just like a statue”, wrote Thandiswa (not her real name) in her diary as a young unemployed woman in her twenties. Having grown up in Khayelitsha after her parents relocated from the former Ciskei in search for work and a better life, Thandiswa’s education was marked with interrupted schooling as they moved around. Pushing through the hard times to matriculate didn’t bring much traction – her marks were not good enough to get her into tertiary education.

For a while, Thandiswa moved back to the Eastern Cape to take care of the family’s rural homestead, but she missed a sense of purpose and meaning to her life. Returning to Khayelitsha at age 24, she set out to reconnect to her teenage dreams and aspirations of “having an adult life” – the wish to study further or to find a job and create an independent life for herself and her children.

Instead, she found herself yo-yoing between tiring and often fruitless job searches, at times getting a foot in the door with short-term work, but then ending up at home again, unemployed, and with bouts of depression over her situation while confined with child-minding responsibilities to the family’s small, overcrowded home. Her keenness to get a job made her a victim to job scams, which in turn landed her in debt.

Her failed attempts at further education or employment brought on cycles of self-doubt and low self-esteem, leaving her frustrated and angry at times.

Thandiswa’s story is one that plays out across South Africa, in some form or the other, for many young people who are not in employment, education or training (NEET). While disproportionately affected by income poverty, most youth also navigate the transition to young adulthood through an often-dysfunctional education system, faced with poor-quality housing, unreliable and expensive transport, ill health, challenging community dynamics, and a labour market that seeks higher levels of skills than what many acquire at school. 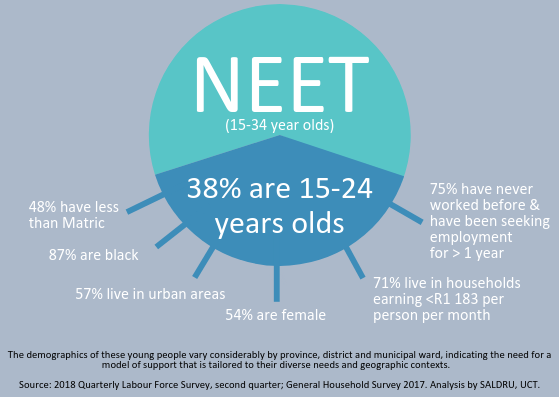 As a result, many young people in the country go through this critical life stage, between 15 and 24 years of age, ill-equipped to navigate the complex social structures that give access to employment or re-entry into education. They often have little support, guidance or know-how of the pathways available to them. While out of school and the labour market, their vulnerability increases as they become invisible to most of the government administration systems, especially once they stop receiving the Child Support Grant.

But, the moments of transition – their final school years and subject choices, attempts at tertiary education and training, work readiness programmes, job placements and internships – are all opportunities for outreach and interventions that are often overlooked in the current policy debates on youth development. And, while South Africa’s current policy framework recognises the need to address issues affecting youth, such as poverty and unemployment, there is no integrated, cross-departmental approach to identify those opportunities where multi-faceted and tailored support could be offered to youth – as is the case for early childhood development.

The new policy advisory unit in the Presidency perhaps offers a chance to revise this approach. Encouraging too, is the recent lekgotla announcement that tackling youth unemployment, and skilling and reskilling 3.4 million South Africans, are on the ruling party’s programme for the new administration.

Globally, the number of young people who are NEET has been increasing alarmingly, attracting significant research and policy attention. The growing body of research shows that the disconnect that NEET youth experience, especially if they remain NEET for a long time, is linked to social exclusion, worsening physical and mental health, substance abuse and increased risky behaviour.

The longer they stay NEET, the less promising their job prospects and the more likely their chances of becoming discouraged work-seekers, in turn keeping them from participating in the labour market, training or education. Due to their marginalisation and disconnect, it is difficult to get an understanding of their challenges and address these inclusively and responsively.

It is an imperative, therefore, to consider how to support young people like Thandiswa to (re)connect to the grid of available pathways and opportunities to empower them to become the productive and self-fulfilled members of society they aspire to be.

But how are other countries assisting NEET youth? In the European Union (EU), member states are implementing a ‘Youth Guarantee’ programme to reduce the number of inactive young people and support their (re)entry into education, training and employment. This intervention considers the circumstances of the individual to ensure tailormade assistance for each young person instead of using a one-size-fits-all model.

Based on this approach, a local research consortium has been investigating what type of intervention can be designed to ensure that South Africa’ NEET young people are equally supported. The project, which was first presented at last year’s Presidential Jobs Summit colloquium, explores how best to deliver a pro-active, well-targeted and multi-faceted package of support as young people transition to early adulthood.

Instead of treating youth as job-seekers only, the approach considers how best to tackle the key factors that keep them excluded with an activation strategy that places the young person as central. It proposes taking stock of each youth’s unique combination of hard and soft skills, strengthens and formally recognises these skills as part their personal resumé, and then uses the assessment to guide and connect each youth to their most appropriate way forward. This could be further education and training, a job-generating or placement programme, the social grant system, and/or physical or mental health care, for example.

Moving beyond the conceptualisation phase, the proposed support model will be workshopped with young people and key youth development role-players. The team thereafter will explore the possibility for pilot projects that take into consideration the actual institutional and labour market realities in the communities where South Africa’s NEET youth live.

The project is led by the Southern African Labour and Development Research Unit (SALDRU), University of Cape Town; in partnership with the Abdul Latif Jameel Poverty Action Lab (J-PAL) Africa; Centre for Social Development in Africa (CSDA), University of Johannesburg; DG Murray Trust; and The Jobs Fund. The Capacity Building Programme for Employment Promotion, funded by the EU and based in the Government Technical Advisory Centre in the National Treasury, provides funding and technical support.

Ariane De Lannoy is a chief researcher officer at SALDRU and Murray Leibbrandt the director; Najwah Allie-Edries is the head of The Jobs Fund in the National Treasury; Lauren Graham is the CSDA director; Nilmini Herath is a senior research manager at J-PAL Africa; and Shakira Maharaj is the DG Murray Trust innovation director.