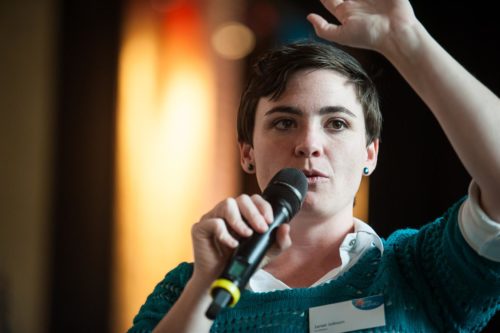 Janet Jobson is the Deputy CEO of the DG Murray Trust, a strategic social investor that works towards building a South Africa where all people can fulfil their potential. The DGMT is one of the largest private foundations in South Africa and works through connecting, communicating, and commissioning strategies to achieve three key goals:

•  An innovative and inclusive society;
•  All children being on-track by Grade 4; and
•  All young people getting their first decent job.

Janet joined the Trust in 2011, initially to head-up their work in the field of leadership development for public innovation – which included driving the establishment of the Activate! network for public innovation. Since then she has played a range of roles, including leading a special focus on the structural and social dynamics that shape people and programme outcomes.

Prior to joining the Trust, Janet worked with a range of civil society organisations focused on human rights, social justice, and youth participation. Among these, she was the National Youth Coordinator for Amnesty International South Africa (2004-2005), the Chair of the Global Youth Steering Committee for CIVICUS (2007-2008), and a founding member of the South African Girl Child Alliance and Girls Education Movement in Africa (2000-2002).

Janet completed a BA (Hons) degree in History at Rhodes University as a Mandela Rhodes Scholar. Her academic work then took her to Oxford University, where she completed an MPhil in Development Studies as a Rhodes Scholar. In 2009-10 she was a Jeanne Sauvé Public Leadership Fellow based in Montreal, Canada.