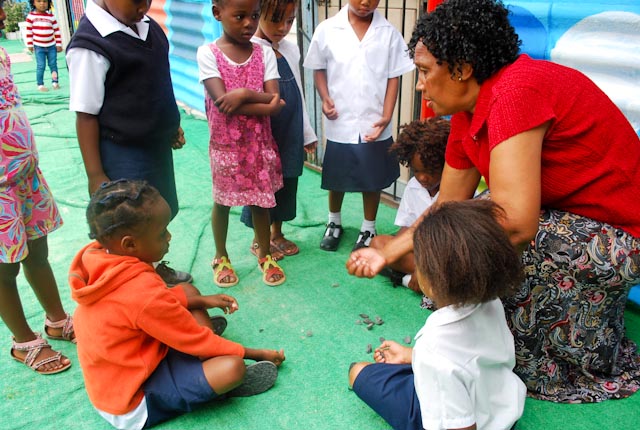 Ilifa Labantwana is an initiative to develop quality, scalable and sustainable Early Childhood Development (ECD) programmes for disadvantaged children in South Africa.  It is jointly funded and driven by the ELMA Foundation, the DG Murray Trust and the UBS Optimus Foundation.

2012 has been a year of change, growth and increased momentum for Ilifa.  The year started with a published Ilifa 2012/2013 strategy which streamlined the programme, honed its focus and set the course for a seamless transition to Phase II in June 2013. Ilifa’s flagship intervention, Sobambisana officially drew to a close in early 2012. The Sobambisana Initiative is the first attempt in South Africa to develop a local evidence base for interventions aimed at improving ECD, particularly those relevant to rollouts under the National Integrated Plan.

A full research report of the Sobambisana findings as well as a series of Learning Briefs were published and released at a jamboree event on Constitution Hill where Ilifa launched it’s because your child is a somebody campaign.   This event began with a breakfast conversation and photographic exhibition which highlighted the work supported by Ilifa in hard to reach communities through home based programmes.

It was followed by a roundtable discussion focused on the move from ECD to practice policy.  The events of the day culminated in the graduation of the Ilifa supported Regensys Public Management Programme where 114 middle managers from ECD Resource and Training Organisations (RTOs) graduated with a Certificate in Public Management. The Ilifa launch was well covered in the media with radio and TV interviews as well as newspaper coverage in The Times, The Citizen allafrica.com, The New Age, Beeld, The Daily Sun and individual.com.

In addition, the national reach of the programme has grown.  Implementation of the modeling and testing in North West has continued.  A new and exciting relationship emerged with the KwaZulu-Natal Social Cluster for a similar initiative in that province.  An interesting innovation in this initiative is that it will cut across a number of departments; including Department of Health, Department of Education, Department of Sports, Arts and Culture and Department of Social Development thus providing a fantastic opportunity for Ilifa to test an integrated model of intervention.

Discussions with Mpumalanga for a partnership were also a feature over the year with the hope that these would be consolidated in early 2013.  In addition, Ilifa has continued its support to work in the Eastern Cape as well as the Western Cape.  Furthermore, was given the opportunity to meet with the National Planning Commission opening a dialogue on possible partnership and to present its endeavours to Treasury.

Plans have been put in place in 2013 to take these important political level dialogues further to ensure that the work of Ilifa gain the necessary moment to enable the achievement of its overall objective:  to provide the evidence (based on actual experience of implementation and careful evaluation) and build the political support and national capacity to scale up appropriate and cost-effective quality early childhood development services for young children in South Africa with particular focus on the poorest 40% of the population.

Toward the end of 2012, Ilifa presented a revised strategy to both ELMA Philanthropies and The DG Murray Trust Boards.  Both have committed to continued support to the initiative to 2016.  Similar support is currently being sought from UBS Optimus Foundation, Ilifa’s third partner.