From TSiBA Education’s Perspectives on the Search for Tomorrow’s Leaders: The perspective of Ferial Haffajee, Editor of The City Press 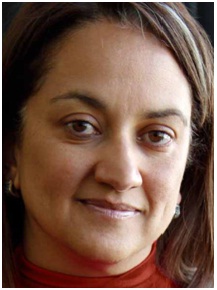 By Jackie Lagus, based on an interview by Leigh Meinert.

Hailing from a strong line of women, Ferial Haffajee was profoundly influenced by matriarchs who resourcefully managed their families and responded to calls for leadership. However, growing up in apartheid South Africa meant grappling with equally powerful political forces that sought to determine what was possible for a young woman growing up in a so-called ‘coloured’ area. “You were never ever trained to think of yourself as a leader. It was never in your sphere of possibility or potential. When I was growing up I never really ever thought: I can stand out, I can be a leader, I can make a difference. “The system was really very suppressing and oppressive. I felt like we were trained as young coloured people to always be teachers or clothing workers, and the system was so awful that the outcome met that purpose perfectly.

“However, there were wonderful teachers who really recognized potential, groomed that potential after school, tried their very best in awful circumstances.” Haffajee recalls that it was her later experiences working within the United Democratic Front and running literacy programmes that provided the backbone for her journey. This journey took her from trade unionist and trainee journalist at the Weekly Mail, to her tenure as editor of the Financial Mail and Mail & Guardian, to her current position as editor of The City Press. Working as a trainee at a small and under-resourced newspaper meant that, as a young journalist, she just had to get stuck in and, as Haffajee recalls, once you showed you were hard working, you were given more responsibility. And it was this ‘cutting your teeth on it’ approach that really paid off for her. “I think experience is always the best teacher, as well as hard work. When I was appointed editor at the Mail & Guardian, I really just had to get in there, roll up my sleeves and work.

“I think being hands-on is very, very important to me. I could never be a distant figure. I think sometimes people who work with me would like it if I let go a little bit. So that is my learning curve; I am trying to do that. “To muck in has always been the greatest experience. Just learning and working hard, having your ducks in a row. I always say, you must be able to do anything that you expect anyone else to do. Write, edit, layout pages, design.”

Whilst Haffajee’s career has been forged on hard work she acknowledges those who groomed and mentored her along the way, the likes of Anton Harber, Mondli Makhanya and Trevor Ncube. When Ncube appointed her as editor of the Mail & Guardian, both a personal and historical milestone, Haffajee believes it was a move that spoke as much about his leadership skills as her potential. Ncube’s belief in her was particularly humbling because, as she recalls, “Until then I had never seen myself as a potential editor. I thought I had reached wherever I was going to as a journalist, when I edited the opinions pages.” Her appointment was also galvanising. “I suppose because those things had been done for me, and because I was getting aggravated that everybody was saying, ‘Oh, but there are just no black people to talk to’, or when I was at Financial Mail, I would complain, ‘Why do we not have black columnists, or black opinion shapers, or more subs, or why do we not interview analysts?’ and they were always saying there isn’t anyone. That is when I started the Little Black Book, it was meant to say, here is a generation of people who are going to be tomorrow’s leaders.

After that experience it is almost now in my DNA to spot potential and leadership and interesting people. “I really think that those of us who have been able to reach leadership positions and have had our dreams come true… We have a duty to a society like ours to grow other leaders. I hate PHD or ‘pull her down syndrome’, especially amongst woman leaders, but generally amongst leadership, so where I work I always try and groom the next generation. Spot their talent and move them up quite quickly. “I am helped enormously in a place like Media 24 where there is a standing practice that if you are going anywhere, if you are taking a delegation anywhere, much of it has to be comprised of next generation people. They firmly encourage that.”

Haffajee continuously touches base with the young people under her guidance to get an overview of their career dreams and ambitions, putting them in touch with a course or an opportunity. She has a formal succession plan in place which does seek to cast as wide a net as possible. It sometimes also comes down to expressing a belief in someone’s idea or expressing faith in who they are. “What has continued to surprise me is how people do not see their own potential. Again I am not sure if that is a South African thing, or what it is, but sometimes they do not see in themselves what we see in them. “That can sometimes be quite frustrating because you think, take it and run, but they do not. It is different strokes I guess. “A lot of what I try to do is validate the idea, so if they have ideas I will say, ‘Turn it into a story’, or ‘You write the editorial.’ I try to constantly validate what they are saying or thinking, or to challenge and mould it into an argument or a piece of work.”

There are more opportunities to draw examples from successful outcomes. Haffajee cites the training programme that she put in place while at the Mail & Guardian. “I established, with enormous resource constraints, a systematic editor training programme.” With the help of Franz Kruger, the programme was broken down into manageable modules which cover important issues such as what to do when you are politically under the whip and how to manage people. Haffajee devotes a lot of her time to mentoring young people. For her the concern is how to expand that reach, and particularly to access the right audiences. “I go and speak a lot. So I go to my old school, a township school, or I will go to St Mary’s or Kingsley College, and when I look at those young women, mostly, I think they cannot help but be successful when everything is geared towards taking them there. “So I think a lot about how do we make that applicable to a much wider range of people, which is what I love about what you guys have done at TSiBA. You have taken that experience of caring for each individual and combining individual nurturing and mentoring, but made it so much more affordable. I think about that in my own context as well – how to extend that to people.”

For Haffajee leadership means being true to oneself and leading a happy team. She cites the Constitution as her “major management handbook… It is my absolute guide. Whenever people say to you, you are unpatriotic or you only do bad news, or the media is this or that, you can look to that Constitution and see how it treats each of us, and especially Section 16. The freedoms that it gives you and how to use that in your personal work has been very important.” She has also found working with a personal coach and development programmes such as the Africa Leadership Initiative to be profoundly helpful on her leadership journey. It is not surprising that Haffajee draws inspiration from pioneering figures within the corporate world and further afield, figures who stand up for what is right and not necessarily popular. “I like lateral thinkers. I like people who are courageous and brave. I admire Al Gore; I admire Richard Branson, people who break the mould and are pace setters. I read a lot on people like them and I read quite eclectic things to see where I can draw inspiration from.” Closer to home there are people like Pregs Govender. “Now there is a figure in my life. How she spoke out against the arms deal and AIDS denialism and worked very, very hard to get ARVs to people. I have learnt to see leaders across society and to study them, and hopefully also to publicize their work.” It is this kind of revolutionary and activist spirit that has inspired Haffajee from an early age. A great admirer of Che Guevara, Haffajee is now keeping a watchful eye on the people and events as they unfold in the politics of South Africa today. “… black empowerment and equity must be made to work, so I am not cynical about them. I am cynical about corruption, but not about empowerment. I think if we do not get that right though, we certainly will be a very wonky society.”

She is particularly hopeful because, “We are a cheeky people. We do not put up with nonsense. We speak our minds. So I think if push came to shove, you will see uprisings against oppression, against an economy that will not grow. For me that fighting spirit in our DNA is the biggest plus. It makes me enormously positive.” She is especially interested in the youth development and leadership programmes that create stability and prosperity. “I do not think we are going to get our youth into political organisations like we were. I think they are not interested. I have had eighty applications for an entertainment writer’s job and five for a political reports job. I think it is a little bit idiomatic. I think the key is to open the young people who I know and work with. They are enormously aspirational, and I think in society we have to answer that aspiration, and business has to do so.”

Highlighting the work that is being done, Haffajee identifies a few names and initiatives to look out for. “In politics I am very interested in Malusi Gigaba and Fikile Mabalula. I think they were put into Cabinet as part of an express campaign of intergeneration leadership, and they were influenced by Barack Obama. “I am interested in how they exercise leadership. I had a long sit down with Malusi, trying to understand how he works, how he thinks, what his vision is, and I was very impressed by it. “I think the DA is doing fantastically at grooming.  Helen Zille has got a very structured young leaders programme. “I am watching with great interest what Maria Ramos is doing at ABSA. She has got a very conscious programme of encouraging young bankers. Gill Marcus is the same, and at Standard Bank, Sim Tshabalala I think, is emblematic.”

Reflecting back on her personal journey and leadership in general, Haffajee says, “I think adversity makes you a good leader in that I probably had to really sharpen my soul, sharpen myself when there was a time when the Mail & Guardian was just being gagged on a monthly basis. That really did make me quite a strong person. “Some colleagues did not want us to fight so hard because every time you did, you lost a lot of money for a poor paper. However, in the end you stand on the side of right and I think it just has to work.”