From cleaning classrooms to teaching in them, meet the Hanover Park father who’s hanging up his overalls to inspire young minds 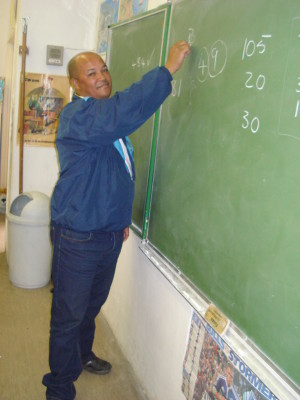 Peter Hendricks has built his life on ‘doing’ words. At age 45, the school caretaker obtained his teaching degree from the University of the Western Cape – working two jobs to realise his dream of empowering his community from the inside out.

“I was relieving a teacher when I discovered children in Grade 9 and 10 who couldn’t read or write,” says Hendricks. “That made me want to become a teacher – not in a year or ten years time, but straight away because the need is ‘now’.”

Hendricks never set out to become a teacher. His first job was as a pest controller, ridding ships that docked late at night of rats, lice and roaches. “I then worked my way up in the clothing industry from driver to trims store supervisor – until I was retrenched in 2004.”

After two years of looking for a job, Hendricks decided to make his own. “I went to a local high school to ask if I could help out – and the principal said yes,” he explains. “So I helped out by answering phones, looking after classes when teachers weren’t there and was involved in setting up their computer lab.” Nine months later he found a contract job as a cleaner at a local primary school, which he followed up with a full-time job taking care of the grounds at a school in Ottery for the following two years.

“You get pushed around with some people looking down on you, but being a cleaner is honest work that puts food on the table,” shares the father of two, who credits his family for encouraging him when things got tough. In fact, he says one of his proudest moments was hearing his little girl shout ‘Go daddy’ when he went up to collect his degree at his graduation ceremony last year.

“I’ve realised there’s no easy road, no hand-outs in life,” says Hendricks, who struggled to find funding to pay for his studies as a mature student. “At the end, I had to work two jobs to finance my studies: I was a cleaner during the day, and did part-time classes at night – sometimes until 21h30 at night, when I would still have to come home and start research for my assignments. Over the weekends I would sell juices.”

And while he admits his family had to sacrifice a lot along the way, the bigger picture always kept them going. “We’re not out of the woods yet, but this journey has taught me to run for what you believe in – and to go for it no matter who or what is in your way. I’ve built up abilities in myself that I never knew existed.”

Still working as a caretaker until he can pay off his outstanding fees for the release of his Post Graduate Certificate in Education (PGCE), Hendricks is looking forward to inspiring even more youngsters to find their own abilities – both inside and out of the classroom.

In a community notorious for gang violence and high unemployment, Hendricks says he is determined to teach youngsters to never despair. “Alcohol, drugs and gangsterism are taking over people’s lives in Hanover Park. We can’t put everything at government’s door – we as parents and teachers need to empower our young people because that’s how you change communities.”

So while he may have majored in Geography, Tourism, English and History as part of his BA in Social Sciences, it’s life lessons that Hendricks is most eager to impart. “I want to show my students you can use negatives to your advantage – just like me,” says the family man, who even managed to find the time to coach his school’s under-9 soccer team to an unbeaten run in 2011. “Our young people can make a success of their lives if we help them identify what they want to be and offer them sound advice and support to get there.”

But it’s not just talking with learners that has made Hendricks so popular among young people. “I think it’s because I also listen to youngsters and the concerns they raise,” he says. “You need to give them respect if you want them to respect you back!”

Having achieved his goal of becoming a teacher, Hendricks now hopes to keep on studying. “It’s about always pressing on,” he says, “and that’s what I want to inspire in the community that has already taught me so much.”

For now, he’s looking forward to working off his tuition fees so he can finally take up a full-time teaching post – and sharing with his students the journey he’s taken so far. Because, while it may have been said that ‘those who can’t do, teach’, Hendricks wants his community to know that it’s those who do, that can.