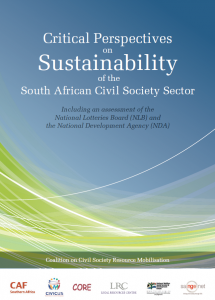 Their research found that South African Civil Society is currently facing a funding crisis.  They list reasons for this situation as “the declining international funding, leadership and identity changes and the apparent unwillingness of government to meet its responsibilities to the sector”.  They specifically investigated the role of the  NLB and the NDA and found that “the legislated enabling environment for civil society was dysfunctional”. They further found that the lack of current and reliable national data about the size, scope and activities South African Civil Society negatively affects the ability of the sector and of government to support it, which in turn compromises the sustainability and effectiveness of civil society in addressing poverty and inequality.

The report provides a brief overview of the historical role of civil society in South Africa, describes the South African socio-economic context and South Africa as a developmental state. The role of the NLB and the NDA are reviewed and recommendations are made for its improvement.  In contrast the report also highlights good grant-making practices from lotteries internationally and by independent local funders among whom DGMT was included.

DGMT CEO, David Harrison, says the following about the report: “Greater collaboration between the State and non-government organisations is going to be critical in the next decade, as we tackle the hard ‘softer’ aspects of transformation.   But there is a risk that civil society organisations just become ‘agents of service delivery’ as they become more dependent on government financing.  We need strong independent funding agencies – even if some of them are publicly funded. That’s why the review and recommendations contained in this report related to the National Development Agency and National Lotteries Board are so vital”.