In our last article we described the initial reaction of our Board to the concept and formal consultation results regarding the proposed Cape Town Great Potential Project (known today as Cape Town Embrace). Although most of the Trustees liked the concept, concerns around viability made them request the development of a more detailed implementation plan.

“There was also a concern from some of the Board members that although we have spoken to some of the leadership programme implementers we did not have enough voice of potential recipients of potential participants in an initiative like this” says DGMT CEO, David Harrison.  That was a tall ask because any information that you would collect from potential programme participants (connectors and beneficiaries) would be hypothetical (‘how would you respond if..’) and would thus be limited in the insight that they render. Mark Gamble (from Educo Africa) however came up with the clever idea of developing a number of case studies based on interviews with people that already had the mentorship-connector type relationship operating.  Interviews with both the connector and the person who is being connected highlighted some of the difficult issues that the programme would have to deal with.  According to David, these issues were around the terms of recognition of people: “In a project like this can one really get to a point where people feel like they are equals in this situation? How do you avoid a sense of patronisation? How do you deal with issues of dependency – increasing demands on the connector for money and so forth?  So it was useful, not that we had not thought about these issues, but it was useful to just see how they emerged, that they were real, that the ones that we had anticipated had emerged in some of these relationships and that they had been dealt with in different ways”.

Following we share a case study describing the relationship of Karen and Lydia to give you a sense of the shape that these relationships took-on.  Note that the names of people and places have been changed or omitted to protect the identity of the participants.

Karen is a woman in her forties, married with three children between the ages of ten and two. Karen runs her own consultancy business and lives in the wealthy southern suburbs of Cape Town. Lydia is 21 years old with a nine month old son. She is employed as a facilitator in Delft and lives in Khayelitsha in circumstances of considerable poverty. She lives with her aunt and her aunt’s family. Her mother lives with chronic physical and mental illnesses. 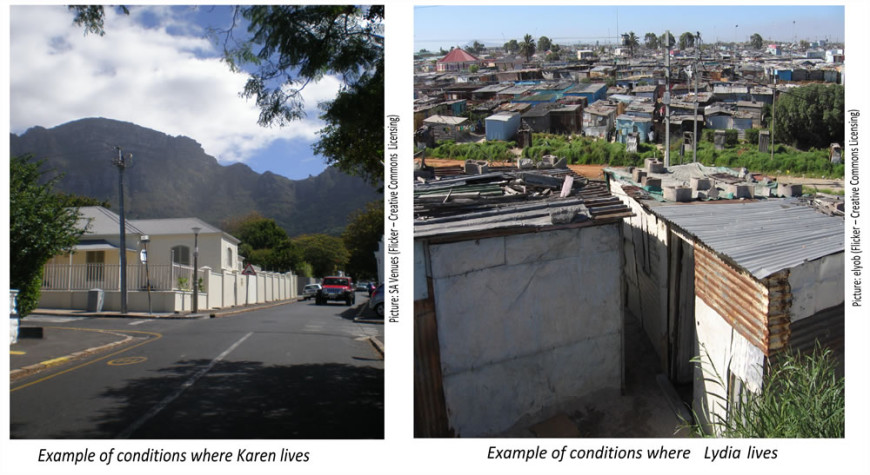 Karen and Lydia met in 2005, when Karen worked for an NGO offering a programme in which Lydia participated. Karen grew very fond of the girls participating in the programme primarily due to their dedication to the programme and their courage in seeking to build their lives in spite of numerous challenges.  After she left the organisation Karen thus stayed in touch with the girls in the programme. Lydia who has fallen pregnant in the meanwhile, reached out to Karen towards the middle of her pregnancy. Because she was feeling particularly unsupported she called Karen and told her of the pregnancy.  Karen decided to support Lydia because she was aware of her home situation, concerned about a lack of support and believed in her potential.  She also felt empathetic – she herself had had very little support during her first pregnancy, but more than that, she was connected to Lydia and fond of her, why wouldn’t she support her?

From Lydia’s side the connection was motivated by a need to find support that was not judgemental. The significant adults in her life had communicated extreme disappointment in the fact that she had fallen pregnant; some of them had essentially withdrawn their care and support. She reached out to Karen, knowing that she needed support in this time and having sufficient trust in the relationship that existed between the two of them.

In Karen’s words: “I knew Lydia felt very alone. I just wanted to be able to support her. At the same time it was quite difficult for me as we come from very different backgrounds and cultures. I didn’t want to take over. My initial reaction was almost to pick her up and take her away and put her in my environment. But when I thought about it, I realised that this was unfair.  What the right thing to do was to offer support to her in whatever way she needed and let her almost dictate the way that it ran. Just let her know that I was there to offer support in whatever way she saw fit. Most of the time it was just a telephone relationship or we would see each other from time to time and I managed to help her get actual stuff together. People were amazing.  Then when she had the baby it was hectic. First of all I didn’t know if she wanted me to be there. Her aunt was with her, but the labour was terrible- days and days. It got more hectic as they were concerned for the baby’s health. I remember when it was time for them to be discharged, I just wanted to take them home with me. But this was not right – she has her own world. I have just tried to be as supportive as I can, emotionally, support wise, sometimes financially. But I haven’t wanted to take over, I mean she is an adult, she is 21 and she can make her own decisions, but I wanted her to know, and I hope that she does know that I love her very much and that I care about her”.

Lydia: “Our relationship really got stronger when I told Karen that I was pregnant. And at that time I felt that I had disappointed a lot of people. Even my aunt, she tried not to show it, but she never wanted to talk about the situation and Karen gave me that support I needed. That support whereby I can come to her and she can speak to me, whereby I can express myself emotionally. We could call or text each other.  When I got the baby it was a very difficult situation and Karen came along and she helped me a lot. When I was in hospital she was there. When the baby was born she was there. I didn’t have most of the stuff for the baby, but Karen arranged a lot of stuff for me. And ya, familywise there was hardly any support – especially in buying things for the baby. Our relationship got stronger especially when I was in hospital, she would come late at night, even to speak to me. There was this one time, I was distressed with being in hospital and worried about my baby. It was late at night, Karen left everything and came through to visit me. She took that time and came through to speak to me and for me that just lightened up the whole story.  It was hard for me that I had disappointed so many people, and then that they would not support me. But my relationship with Karen made this better. Even though I couldn’t reach my dreams. Thanks a lot that I have someone like Karen, without her I wouldn’t be so proud being a mother now, because now I am happy especially when I look at my baby. I didn’t expect that I would look at him and know the way I love my baby now”.

Lydia and Karen’s relationship is continuing today through telephone calls, text messages and visits.  They both say that their communication has not been excessive, was mostly based on need and response, and that although they would like to connect more, life just keeps them too busy.

Karen reports that this relationship has been a source of insight and personal growth to her: “The relationship has impacted hugely because it constantly keeps me in check in terms of my own reality and how I view my life and the challenges I face. I often think things are so difficult for me but when I realise the enormity of hers I realise how very fortunate I am. I am very much the type of person that goes into things with all of myself, sometimes I think I take over, I don’t look at the situation and think what is actually needed of me. I think this has been a lesson of walking alongside Lydia. Not wanting to put my own opinions on her. I will support her as she needs, and what do I get back? Well, I love her”.

Karen and Lydia are convinced that their connection was very much strengthened through the focus on the pregnancy and Lydia’s baby.  Karen says although her husband prefers not to get involved and that some of her decisions (like going to hospital very late at night to see Lydia) were difficult for him – he supports her.

Some of the key things that David and Mark learned from Karen and Lydia’s story to inform the development of the Cape Town Embraced programme:

An aspect that became very evident through this interview was Karen’s role as witness to Lydia’s story. Through her presence, Lydia has a story of pregnancy, childbirth and mothering that although challenging at times, is honoured and celebrated. In this witnessing of Lydia’s story, Lydia has been able to bond with her baby.

There were several instances where Karen wanted to offer support or advice that was counter to what was appropriate for Lydia. The sense for both Lydia and Karen is that if Karen had imposed her advice the relationship would have been threatened; and the relationship was the most important factor to Lydia.

The value in the relationship between Amanda and Fezeka offered Fezeka a consistent and significant “anchor” from which she could manage her pregnancy and people’s response and judgment to her pregnancy. For Amanda this relationship has given her deeper insight into South African society and possibly a sense of significance and purpose.

Karen’s sharing of knowledge supported Lydia in ensuring that she was better informed as to accessing resources and being treated with respect by various health care workers.

Karen expressed this repeatedly during the interview; how this relationship had exposed her to beliefs and to behaviour that was of another culture. This has enriched her life, providing a deeper understanding of other South Africans; and in this greater competence in living in South Africa.

This relationship is based on value and regard between two individuals. There was no sense of welfare or victimhood of rescuer. This was evident in the degree of honesty that exists between Karen and Lydia. Karen is able to express her opinion and Lydia is able to ask for advice or material need secure in the knowledge that Karen will always be honest.

After this second round of consultation and having found it very useful, David and Mark decided they were ready to proceed with the development of the required implementation plan. In our next article we share what emerged from another turn at the drawing board – this time to thrash the concept out to a level that would allow people to start imagining how it might be implemented.