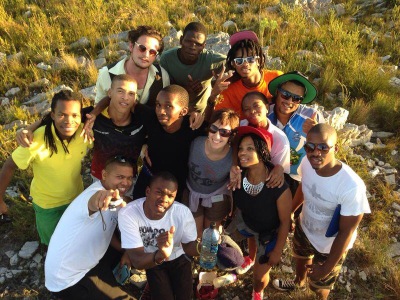 “There are white people on the trains, and maybe you want to talk to them, to be friendly. But what do you say to them?” Simamkele said. “You’re asking yourself, what are they interested in, what do we have to talk about?

“Sports? What sports do they like, do they like soccer or do they like rugby? The news? Nah, most white people don’t like the news. TV? They don’t watch Generations. Then you wonder, what are they doing when we are watching Generations? What do they do after work?”

It was the second night of Activate! Leadership training, and we were talking about why it’s hard to start a conversation with a stranger of a different race, about our questions and our assumptions.

Yet once we’d started talking, we couldn’t stop. Throughout the rest of the week, we unpacked those questions and differences – informally, over lunch and tea and late into the night. We spoke about kasi life, South African history, witchcraft and muti, religion and faith, politics and Marikana, gender roles, dating and marriage and love.

And we didn’t just talk. At Activate, we sang together and danced together. We stayed up past midnight, channelling our passion into project proposals. We shared stories about our most influential leaders. We produced puppet shows and a flash mob. We worked in teams that reflected the diversity of our rainbow nation.

By the end of the week, touch was a norm. We held tightly to one another as we tackled teamwork challenges on the lawn, trying not to step on the grass. We high-fived and hugged exuberantly when our project proposals secured (hypothetical) funding. We massaged teammates’ shoulders in times of high stress, clasped hands when talking earnestly. It felt natural – but it occurred to me that in the world I usually inhabit, it isn’t.

Which led me to ask myself: what does it take for these real, raw conversations to happen, and for friendship and respect and love to grow?

It takes shared space and a whole lot of time – both of which are hard to find when our cities are still divided physically, socially and emotionally by the scars of apartheid. Even at universities, accents and socio-economic background still play a big role in who we spend our time with.

It takes common purpose – being thrown into situations where whether we have matric or an honours degree, we’re invested in the same outcome, and we can’t get there unless everyone comes to the table.

Most of all, Activate breaks down barriers because it’s not just about what we do – it’s about who we are. We are Activators – and when we meet a fellow Activator, we know that through the experiences we have shared, there is more that unites than divides us. When we take on an identity, beyond coloured or black, Zulu or Xhosa, it shifts the way in which we can relate to others.

The Presidency’s National Youth Policy for 2009-2014 argues that youth from different racial groups require specialised and tailored interventions. While it’s crucial to recognise people’s backgrounds and cultures and respond to their individual needs, perhaps the most powerful and most needed interventions are those that break down barriers instead of reinforcing them.

Activate! is premised on the idea that youth can do more to help each other: that if we build a powerful network of young people who want a better future for our country, it can link us to opportunities and collectively create change.

It’s happening, it’s powerful, and I am proud to be a part of it.

You can read more about Activate here.