100% In: The Supernews Tertiary Drop-out Superstage 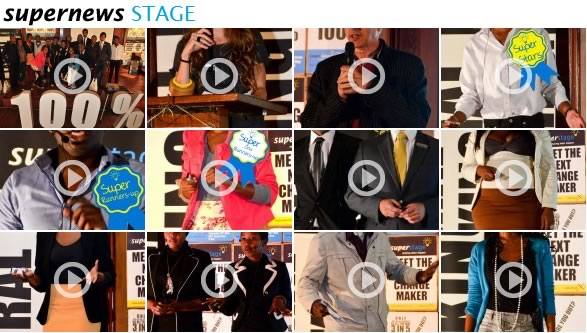 Supernews is a citizen-generated, citizen-funded news and idea network that encourages young South Africans to change the content of the news as we know it, one success story at a time, one big idea at a time to increase awareness, change systems and influence new ways of thinking; democratise the news-making environment by generating news content via crowd participation – namely, a Citizen Journalist Network; and to create new news and build an open innovation platform that will attract, showcase and invest in the new news-maker, inspiring them to solve social challenges affecting the country.  Through the Super Stage platform, Supernews encourages young South Africans to brainstorm, develop and share solutions to social, political and environmental problems.  The best ideas are voted for by the Supernews audience (made up of fellow students), and, as part of their prize, the team behind the winning ideas are given the financial and strategic support necessary to pilot and implement their ideas.

Statistics from the Department of Education illustrate that of the 120 000 university students that enrolled in 2000, 36 000 (30%) dropped-out in their first year; a further 24 000 (20%) dropped-out in their second and third years of study; and of the remaining 60 000 (50%) fewer than half (22%) graduated with a generic bachelor’s degree within the specified period.[1]  Of the non-completers included in the student retention study done by the HSRC (2010) approximately 68% were from low socioeconomic status (SES) categories.  Despite various bridging and remedial programmes provided by tertiary institutions the high student attrition rate has persisted.  While the long term solutions involve improving the education system in general – ensuring that students are better prepared for tertiary study – and improving access to funding for tertiary education, there are few organisations that are specifically aiming to address the problem of drop-out in the short term even though the thousands currently dropping out represent a loss of human potential and investment while cultivating perceptions of inadequacy and failure among youth.

Supernews, supported by the DGMT, asked young tertiary level students what they could do to address the problem of drop-out.

Supernews asked young people to take to their campuses to:

–          Come up with innovative ways to address these reasons, and reduce drop-out rates

Students heeded Supernews’ call, and entries poured in from around the country.  Eleven finalists were selected, and presented their ideas at the Super Stage showcase held on the 10th of May.

Over the next few months we will publish a series of blog post to showcase the top ideas, including the winning idea, Money Minds.  This Super Stage will not end here, and Superstage and the DGMT will support the young change-makers who took on the Super Challenge of addressing tertiary drop-out.   To learn more about how you can join the Super Change Makers and to the efforts to lower drop-out rates, visit the Super Stage platform and join the movement to change the news, one idea at a time.